MiR stands for Mobile Industrial Robots, and they call their products Autonomous Mobile Robots (AMR). Just like many other robot and cobot brands and makers of robot arm accessories, MiR comes from Odense, Denmark.

The AMRs themselves find their own way in contrast to Automated Guided Vehicles (AGV). The AGV needs magnetic lines in the ground to find its way and therefore follows fixed paths. The MiRs "map" the space in which they drive around with the help of cameras, sensors and smart software. This allows them to adjust their path in the event of unexpected obstacles: they drive around them. In terms of software, too, it is a collaborative robot: the user can easily operate the MiR with the graphic interface on a tablet or laptop.

MiR has 4 variants that differ in load capacity: 100 kg, 200 kg, 500 kg and 1000 kg. The AMRs with a lighter load capacity are intended for transporting lighter products. The latter two are specifically meant to transport pallets. MiR also has released a hook (MiR Hook), with which a roll container can be attached to a MiR and even more can be transported. Special Fleet Manager software makes the use of multiple MiRs in the workplace possible. 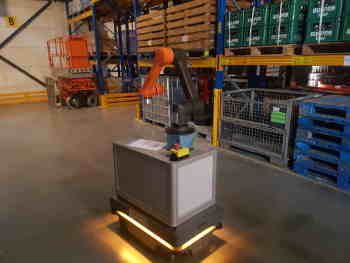 Other options are to mount a cobot on a MiR, making the set as a whole an autonomous mobile cobot application. In addition, there are more manufacturers that make accessories for MiR's AMRs, such as Nord Modules, that make gates. This makes it possible for a MiR to pick up products independently at point A and deliver them at point B. There are also manufacturers that make surface-mounted modules specifically for MiR, such as shelves or lifts.

Olmia Robotics is dealer of MiR’s AMRs and of Nord Modules’ gates. 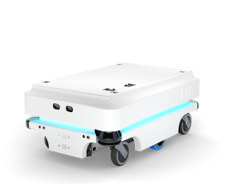 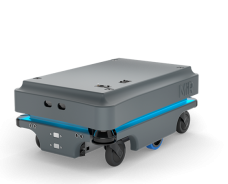 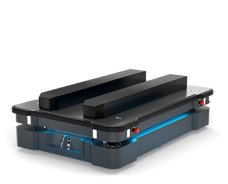 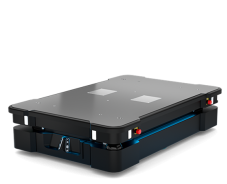